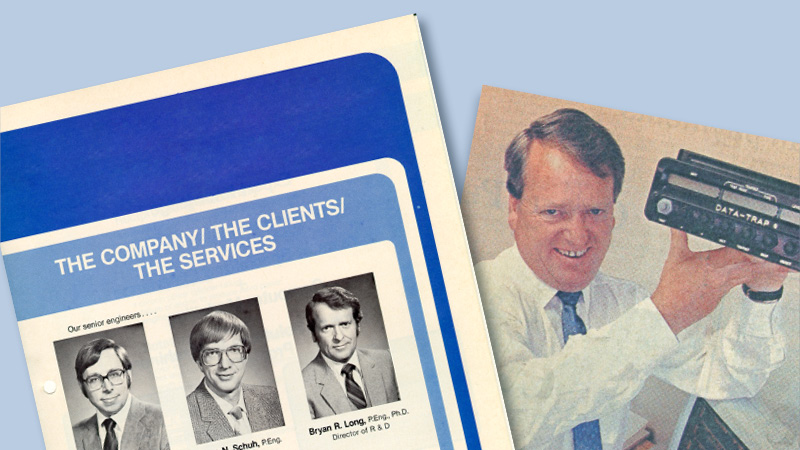 A lot can change in half a century. After 50 successful years our vibration, dynamics and noise team has a rich heritage of experience, skills and hairstyles to draw from.

It’s hard to imagine how vibration concerns were tackled in 1967, but back then our engineers had to solve complex problems without any of the computers, analysis software and advanced sensor capabilities that we use widely today.

The founders of BETA were truly pioneers in their field. They built their own sensors and designed new electronic test equipment to understand the root cause of vibration and performance problems on compressors and pumps. They then had to find innovative solutions, resulting in novel software simulations and patents.

Dave Schuh founded BETA, and Brian Howes and Bryan Long came on board soon after. Through their passion and focus, the company became a market leader in vibration and pulsation analysis.

Brian Howes joined fresh out of university in May 1972, and has had experiences with machinery of all kinds over his long career: “The work we did on large integral reciprocating compressors, gas turbines, centrifugal compressors and other equipment led us to better understand the modes of failure and some of the sources of problems in machinery. We were then able to design better tools for solving the problems. Our computer models were greatly enhanced by the continuous feedback from field work we undertook.

“We are still always learning. Recently, at a refinery in Spain, I was presented with a situation involving a blower that occasionally had a failure of the stub shaft. The result was the coupling hub and stub shaft bouncing around inside the noise enclosure. Operators were rightly afraid to enter the enclosure when the unit was running. We were able to identify a lateral critical speed that could be changed with the relatively simple addition of a carefully chosen mass on the coupling hub - a very satisfying result for everyone. Helping people prevent problems with machinery and fix issues when they do arise has always been our reason for existing.”

Bryan Long joined BETA in November 1973: “I met Dave Schuh when he was looking for someone to lead the development of a digital simulation reciprocating compressor pulsation service. Work like this was being carried out on analogue computers but there were obvious advantages to transitioning to digital technology. This was pioneering work.

MAPAK, our mechanical acoustical simulation software, was developed and launched commercially in 1975. Over the years the service evolved and became very successful through ongoing research and development. Still called MAPAK, it really has been the foundation of our success. These days it is a very different technology from when we launched it, but it’s been state-of-the-art every step of the way. MAPAK enabled us to become a dominant presence and industry leader in the speciality of reciprocating compressor and pump vibration analysis.

“Overall, I believe there are four reasons why we have been so successful: ongoing innovation as the foundation, our drive for excellence, being selectively opportunistic and our commitment to customer satisfaction, which became part of our culture.

“I have enjoyed working here for the past 44 years and I see a positive future with additional global opportunities as part of Wood. Previously, the vast majority of our work was in Canada and the US, with some work in South-East Asia. Now our opportunities have increased in these areas and throughout the world.”

Shelley Greenfield, service line manager of the machinery analysis division, was hired in 1985 to help set up a technical library: “Very quickly I started working on pulsation studies.

“Over the years I have touched on a few of our other services, but my main focus has been pulsation and mechanical studies.

“It has been very interesting to watch the reciprocating compressor industry advance. When I started, a large separable compressor was about 1200 horsepower running at 900rpm, which is relatively small by today’s standards. As industry developed larger, faster compressors, the analysis world also had to change. A group of world-class engineers and a strong field services team has helped us stay at the leading edge of technology. The evolution of computing power has also helped us succeed in our continual drive for more accurate results and efficient modelling tools.

“We have always promoted a culture of continuous improvement and customer focus. It has been very rewarding to be part of such a dynamic organisation.”

Another long-serving employee is Kelly Eberle, principal consultant, who is approaching his 30th anniversary with the business: “I’ve been incredibly lucky to be involved in almost every service area, from machinery design and field troubleshooting work, pulsation studies and finite element analysis, to research and development, and delivering courses for customers.

“I believe our success is down to the people. You have to have the right people in place to understand the technology and keep pushing it forward, to strive for improvements and advancements.

“There were only around 20 employees when I joined in 1988. It felt like a small team, but when I started travelling, I realised that there were pockets of people in far flung places round the world who knew our reputation. It was inspiring to know what a significant impact was being made to people, customers and the industry as a whole.

“Working within the oil & gas industry is now a major part of the business, but it wasn’t until the late 1990s when we successfully completed a logistically complicated project that we started making significant inroads. We designed and commissioned seven reciprocating compressors on an FPSO operating in the Gulf of Thailand - quite an accomplishment for a small team located in the Rocky Mountains of western Canada. We developed the pulsation and mechanical design of the compressor packages for a US customer, completed the structural dynamic analysis for a customer in The Netherlands and performed on-site testing in the Singapore shipyard during construction.

“Being part of Wood gives us much greater exposure to new customers and industries; our scope of work is expanding. For example, we have tripled the size of our pump team and our US office. It’s had a hugely positive impact on the business.”

Russ Barss, vibration, dynamics and noise director, says: “We grew cautiously at first, but then expanded across North America and eventually into the global marketplace. In 2004, the three shareholders passed the reins over to me to help keep the momentum going.

“In 2015, we joined Wood, followed shortly by SVT Engineering Consultants, the dominant vibration team in Australia, and a group of leading vibration experts in the UK. This combined capability created the VDN team, a global leader in vibration, dynamics and noise.

“We are privileged that Brian Howes and Bryan Long continue to be actively involved in the business, providing their technical expertise and mentorship to our team. We hope this party continues for another 50 years.”

The VDN team can be reached at: info.vdn@woodplc.com