The history of water treatment dates back thousands of years. Yet, the use of reinforced concrete to build tanks and pipes has only been around since 1868. Today, concrete is not only the most widely used building material in the world, it’s also the second-most used substance after water. For Sewage Treatment Works (STW), where lifecycle and durability demands are major considerations, concrete remains the standard go-to on projects worldwide. Yet, in situ construction involves more labour and more time, as well as the considerable carbon released by onsite concrete work and construction. Early collaboration and ideas generated by the teams involved in the Wolsingham Sewage Treatment Works (STW) project resulted in innovative and sustainable ways to update the approach to these crucial projects. They have also created a buzz in the utilities sector, where previous advancements were typically limited to single aspects of a project - not the entire build. 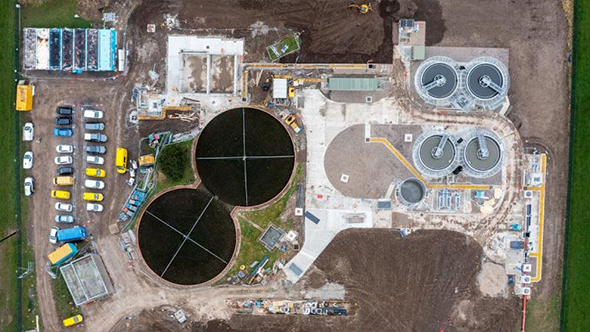 Increased flows and loads in the catchment from new housing developments was one of the main drivers for the Wolsingham project, as were recurring pollution incidents linked to combined sewer overflow from nearby areas. In addition to that, existing assets at the STW were in a state of disrepair and approaching end-of-life. So, all things considered, it was a project that was a long time in coming and not unusual for the industry. In fact, we completed the original feasibility study back in 2012.

While a standard solution for the STW might have typically included the demolition and in situ casting of new concrete structures, the project team decided early on to approach this programme with an entirely different mindset. In a move that was completely different than anything the water industry had ever seen, Wood, as project designer, and Tilbury Douglas Construction, as principal contractor, decided along with the client, Northumbrian Water, to fabricate everything needed for the project – offsite. This change of mindset and the level of collaboration among all the parties involved, including our supply chain partners, would prove key to the project’s success. Not only would the approach be a first for the water industry, but the project partners were also keen to learn lessons along the way – whether good, bad, or indifferent – even if they later decided that the project could have been better delivered through traditional methods.

When design work began in 2018, Wood started drafting a plan to make the new works fit within the existing footprint of the Wolsingham site. The benefits of this were two-fold: it ensured that no additional greenfield land had to be purchased for the needed improvements, and it enabled us to protect the local environment. This specific Northumbrian Water facility sits adjacent to the River Wear in County Durham, which is part of a region in the north east of England that is widely regarded for both its natural beauty and ancient history.

Our final design included a combination of brand-new components, upgrades to existing features and a general new way of thinking – all of which was aimed at showcasing the benefits of both Design for Manufacture and Assembly (DfMA) and off-site construction, especially as they relate to reductions in cost, schedule, and environmental impact, and improving overall quality. While we were contractually obligated to a design life of 50 years, stainless steel suppliers were not only able to meet that need, added benefits associated with this choice were also achieved. A concrete mixer can only transport up to eight cubic metres of concrete, so that could mean hundreds of deliveries on a typical wastewater treatment project like this one. By constructing various components from steel, as well as other sustainable materials, and assembling them offsite, we were able to achieve a massive reduction in the carbons that are typically associated with onsite concrete work. How big? On the two primary settlement tanks alone, it was the equivalent of 47 tons of carbon – a total that doubled with the addition of the humus settlement tanks and increased even further when the new sludge storage tank was added. By any measure, it was a major achievement made possible by a new way of thinking – and our novel approach to what a STW build/project can look like.

We also replaced the inlet works. Traditionally, these would be concrete structures with concrete channels. Instead, we worked together with a local supplier, which manufactured glass-reinforced plastic (GRP) boxes. They incorporated standard approaches and flumes and were MCERT compliant for flow measurement, plus factory-tested prior to delivery. On top of that, the install for this adaptable concept was as simple as dropping them onto the in situ base slabs and backfilling them. So, what would have typically involved a four-week build with concrete was completed, instead, in less than seven days.

Another part of the project, where the offsite build was key, involved our work on the sludge pumps and skids. The versatile approach that the project team used here was fabricated in a factory, completely tested, and delivered to the project site, where it was simply dropped into place atop the in situ base slab. The best part? It only required a few hours to install. We even developed a modular, infinitely expandable and adaptable aboveground design for the Motor Control Centre (MCC) kiosk, which was also developed and built offsite and placed on an in situ slab, where it serves as the electrical and instrumentation brain that drives everything onsite at the sewage treatment facility. This MCC design is now being adopted across Northumbrian Water’s framework, and other water companies are expressing interest in it, too.

For the four new settlement tanks, the original tender period we were given, using in situ concrete, was a timetable of 21 weeks excluding all metalwork, bridges, and scrapers. Because we decided instead, to fabricate the tanks from stainless steel, the entire process – from the very start to completely installed onsite – was only six weeks. The supplier also provided one-stop services, including design, civils install, and the supply and set-up of the access metalwork and scraper bridge.

The lessons learned were many

From the very beginning of this project, we set out to challenge the status quo – to seek new ways, and a more sustainable approach, to what is an age-old issue: sewage treatment and the facilities we build to make that happen. For a project that was originally tendered and awarded based upon traditional reinforced concrete structures, the full project team worked together to collaboratively embrace the use of innovative solutions that broke new ground – and new ways of thinking – across several work packages.

By fabricating everything needed for this project offsite, we achieved a substantial reduction in the carbon emissions long associated with this work. On top of that, we also cut our time onsite by 20% overall and man-hours by 47% specifically. This, in turn, also improved our overall safety performance. These achievements are even more exemplary when you consider that the project was delivered during the height of the COVID-19 pandemic, which required adherence to strict social distancing constraints during construction.

Additional takeaways from the project include greater predictability in delivery times and the fact that our work caused less disruptions to daily operations at Northumbrian Water’s Wolsingham facility, as well as within the residential communities nearby.

Essentially, what we accomplished on this project was the equivalent of a new build, using the same exact footprint, but at a fraction of the cost. The innovative solutions we sought and implemented yielded never-seen-before results that have made headlines across the Utilities and Water sectors. The project has also been the recipient of several engineering and water industry awards. When all was said and done, we had cut more than four months from the programme duration and met our consent date early, enabling the earlier delivery of better effluent quality into the river, along with the associated environmental benefits that provides. On top of that, our ground-breaking approach and solutions yielded the project a grand total of more than £1M GBP in savings.

The Wolsingham project was recognized with the following awards: