Don't show this message again
Search all in one place
Blog
$2 hydrogen: The goal of H2 to Australia
Brent Gardner
Regional studies manager

Hydrogen currently is an expensive vector given the energy required to produce it, the large amounts of conventional fuel required in the form of methane, plus the uncertainty around electrolysis costs. So, how can it be scaled to achieve an ambitious A$2 goal?

Recently my colleague Kate Matisons discussed the Australian hydrogen supply chain and highlighted some of the key elements that make it central to the future of hydrogengrowth across Asia Pacific. Following the Australian Financial Review’s Energy and Climate Summit, Andrew Stewart also shared his views on securing Australia’s energy needs and export future.  Like anything, cost dictates. This is certainly true for the developing hydrogen market and more specifically how competitive it can be with contracted liquefied natural gas (LNG) prices in Australia.

Is there ‘green’ money in H2 production?

Australia’s ambitious target is to generate green hydrogen under A$2 a kilo at the site of production. From an energy content basis, that’s around US$11 (A$15) per one million British Thermal Units (MMBTU). Currently contracted LNG is fetching US$8-$9 (A$11-12). Supply chains of hydrogen into Asia have many moving parts. All of course influence the cost of hydrogen.

Let’s first look at the target of $2 green hydrogen (from electrolysis) for the domestic market. You need a lot of energy to make 1kg of hydrogen. To achieve $2, the laws of physics require the electricity cost to be below $50/MWh. The economics of course requires a rate of return on capex, so the power price needs to be below $30/MWh (considering the electrolyser efficiency).

How much the wind blows, the sun shines and its connection with energy storage is critical to maximise hydrogen production and export infrastructure. The NEM (Australia’s National Energy Market) spot prices are starting to intermittently dip below $40/MWhr. A wind farm reverse auction for Canberra was last year awarded at $45/MWhr fixed for 15 years. Running your electrolyser for a few hours a day on cheap power won’t make a return on the capital cost of the hydrogen electrolyser; but it is a step closer to our $2 target.

There’s a global focus on the cost of electrolysers with costs dropping and efficiency increasing. On the other hand, green hydrogen needs a lot of clean water as feedstock, in fact, 9kg of water is required to make just 1kg of hydrogen. If seawater reverse osmosis (SWRO) is deployed to separate the saltwater, this leads to additional challenges of managing about 9kg of brine (concentrated salt solution) too. If you take the average capital costs of Australia’s largest SWRO plants built in the last decade or so, the overall challenge for an economic case becomes clearer.

Producing hydrogen for $2/kg for the domestic market is one thing; moving it 8000kms to the end-market is another. Port infrastructure isn’t cheap and requires significant long-term investment. An export market is a big challenge, and an opportunity for the economy. “Are you in team ammonia or team liquefaction?” was a common conversation starter a year ago. MCH or ‘hydrogenated toluene’ quickly joined the conversation. Today, it seems, many people (not all) predict ammonia as the preferred option to move hydrogen, perception is it’s cheaper and proven. Green ammonia technology is moving rapidly too. 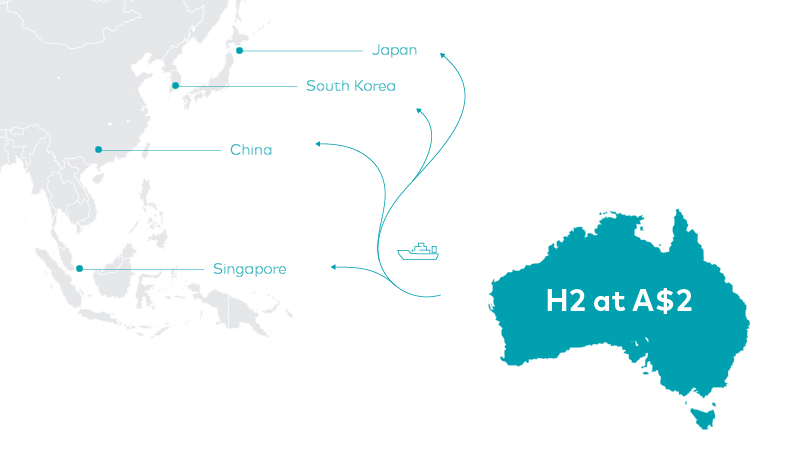 Brown ammonia, made from gas with high carbon emissions, is around US$200 to US$250 (A$270-340) a metric tonne. Adding carbon capture and storage makes ammonia ‘blue’. Ammonia’s end-market today is mainly fertiliser, even though you can burn it as a fuel too. Converting today’s price to MMBTUs yields a price of US$9 - US$12 (A$12-16)/MMBTU which is a premium to LNG’s long-term contracted price. If carbon neutral (green or blue) ammonia indeed becomes the hydrogen driven product of choice for energy export in Asia, will we see the first market open to the fertiliser trade given the premium?

We’re seeing interest in ammonia as fuel for shipping, with a chemical scrubber in place to remove pollutants, particularly to limit nitrogen oxides (NOx) emissions. There’s currently a debate on the small changes required for existing gas turbine generators to run on ammonia, hydrogen or both. Again, a scrubber keeps NOx down. Although the power output of the turbine is reduced; is it possible that current power generators in Asia could switch from LNG to ammonia? Where LNG is stored at -161°C at close to atmospheric pressure, ammonia will stay a liquid below -33ºC, far easier and cheaper to store and handle. Switching the generators’ LNG storage facilities and LNG carrier ships to ammonia could be a small change.

Compare today’s lower cost of brown ammonia at US$9 (A$12) and Australia’s carbon-neutral hydrogen target of US$11 (A$15) on an MMBTU basis. The carbon would need to be captured (or offset) from the brown ammonia process at less than US$2 (A$3) per MMBTU of product or less than US$16 (A$22) per tonne of CO2, to achieve Australia’s target of carbon-neutral $2 hydrogen. CCUS cost estimates vary greatly, though US$16 challenges the lowest of estimates.

There is still so much to do, and we are certainly seeing a groundswell in commercial hydrogen projects. Technology and innovation are driving the economics. But the question remains; at a premium to LNG and no carbon price, at what price will the market swing towards hydrogen?