If the world is going to realise the potential of hydrogen a vast increase in production is required.

Last month Alan Mortimer, Wood’s clean energy director of innovation, wrote about the potential of hydrogen as a sustainable, clean and plentiful energy supply. If the world is going to realise this potential a vast increase in production is required. According to the Hydrogen Council [1], there could be a tenfold increase in global demand for hydrogen by 2050. This will primarily be driven by the need for cleaner fuel options and increased use of hydrogen as an energy vector.

The process of producing hydrogen requires electricity or heat to power the process.  Currently, hydrogen is primarily produced via steam reforming of fossil origin feedstock which produces CO2 as by-product that is normally then released to the atmosphere, contributing to greenhouse gasses and counter to the clean fuel objective. So, to meet the hydrogen required to support a hydrogen revolution, it needs to be produced through sustainable processes to ensure it contributes to decarbonisation targets driving the global energy transition.

Solutions are available and viable: blue hydrogen is produced from fossil origin feedstock, but the CO2 by-product is captured for sequestration or for re-use, rather than emitted into the environment.  An alternative solution is green hydrogen that is produced via water electrolysis which can be powered by electricity from renewable sources. 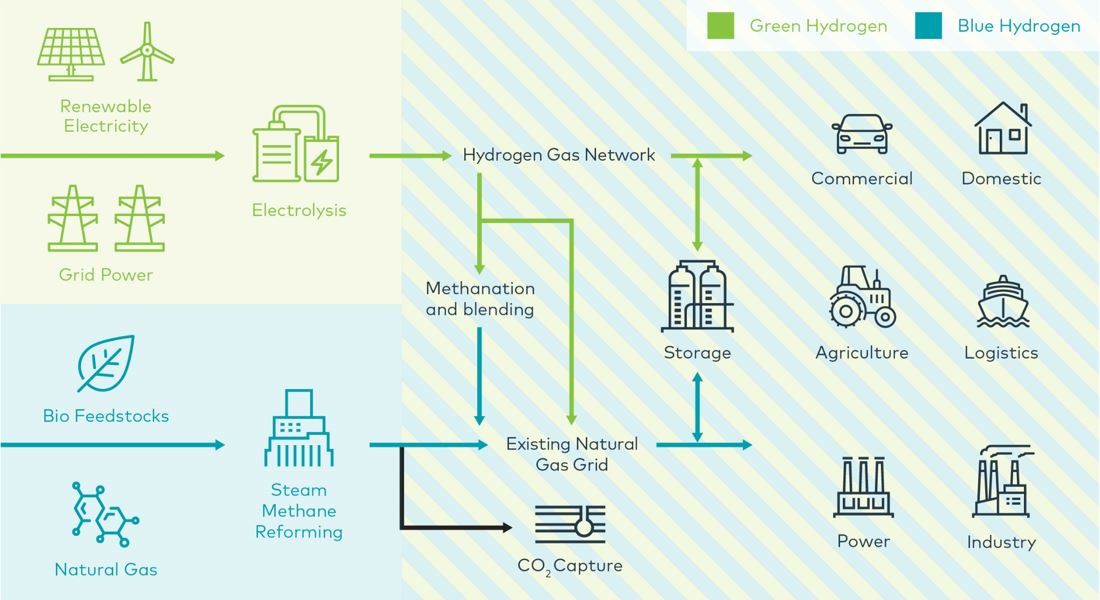 Scale up of these solutions are not without its challenge. Green hydrogen has traditionally been more expensive than blue hydrogen primarily due to the current high investment cost related to the electrolysers, as well as the availability of renewable energy to power the process.

We could soon see a change with the ongoing cost reduction of wind and solar power, as well as electrolyser technologies. Green hydrogen also presents a great option in the storage market where local production of renewable electricity exceeds what the market needs. Wood has been deploying it’s multi-disciplinary and cross-functional consultancy to study the opportunities in this area, for example we were part of an industry collaboration on the potential to power ferries from local renewable energy resources in the west coast of Scotland.

Green hydrogen can also be used to react with CO2 captured in blue hydrogen production units to produce substitute natural gas by means of a process called methanation for which Wood have a patented technology.

Blue hydrogen – which Wood is one of the world’s market leaders in production of - is scalable to very large production capacities and presents a very competitive investment cost, but it is challenged by the disposal or utilisation of the captured CO2.

Whilst there may appear to be competition between green and blue hydrogen production, in practice the opportunities are contingent on geographic and resource considerations. The most cost-effective renewable energy locations are only available in specific regions and environments, and at the same time blue hydrogen production has to be located at or near sites suitable for carbon capture and sequestration. These locations may not overlap leaving both green and blue hydrogen with potential for large-scale deployment.

A third alternative may play a role in the emerging hydrogen market: bio-hydrogen. Bio-hydrogen is produced from liquid bio-feedstocks, such as vegetable oils: this is a relatively new space of initiatives where Wood is developing new technology.

It’s clear that the hydrogen sector is set for exceptional growth, finding the right production solution to achieving carbon reduction and energy demand is critical in realising the potential. Omar Bedani has a master’s degree in chemical engineering from Politecnico di Milano. He started his career as a process engineer for fired heaters. Being involved in the development of fired heater projects, Omar built up significant experience and expertise in designing steam reformer heaters for hydrogen production before a move to project management. Omar now works in business development, with responsibility for growing our global hydrogen technology capability.