Previously, Wood colleagues have been sharing insights on the potential of hydrogen and its contribution to the global energy transition. Alan Mortimer discussed its clean energy credentials, Omar Bedani shaped the challenges of scaling up hydrogen production, Adam Frew offered perspective on how it could compliment a more sustainable mix of fuels in the transportation sector. Then David Cunningham presented a view on the economics of hydrogen.

I want to focus on a specific opportunity region. Highlighting the hydrogen supply chain in Australia and discussing some of the key elements that make it central to the future of hydrogen growth across APAC.

“Australia has the potential to be an economic superpower of the future post-carbon world”. If you’ve read Superpower by Ross Garnaut, you’ll recognise the vision and optimism from one of Australia’s most influential economists. So where does hydrogen fit in all of this? It’s anticipated that Australia can be a significant market player as a producer and exporter of hydrogen. As a result the country is home to several pilot projects to develop an international hydrogen supply chain.

As one of the top markets in the world for renewable energy, Australia offers optimal potential for producing hydrogen through electrolysis at minimum cost, because it has access to renewable energy sources at low levelised costs of electricity. This process is referred to as green hydrogen production. (COAG Energy Council, Nov 2019).

Along with renewable energy resources, Australia also has huge land area, natural gas, and water to support the hydrogen project pipeline, as well as previous experience developing necessary infrastructure that can be leveraged to develop hydrogen processes and export infrastructure. This is particularly relevant for blue hydrogen as the gas export industry is already well established in Australia. (National Hydrogen Strategy, Nov 2019)

Blue hydrogen is the production of hydrogen through (carbon emitting) Steam Methane Reforming that is developed along with carbon capture and storage solutions (CCS), and Australia’s geological storage potential presents an opportunity here. Chevron’s CCS on Gorgon LNG is a great example of an operational project and Cooper Basin’s capacity to store 20mtpa of CO2 presents an attractive opportunity for Santos. Additionally, the state and federal governments are investing in CarbonNet; a project that is advancing the science and viability of CCS at commercial scale in the Bass Strait; a world class CCS location off the South East Coast of Australia.

The below graphic summarises the hydrogen supply chain capability in Australia, from sustainable production choices through to storage and transportation options. 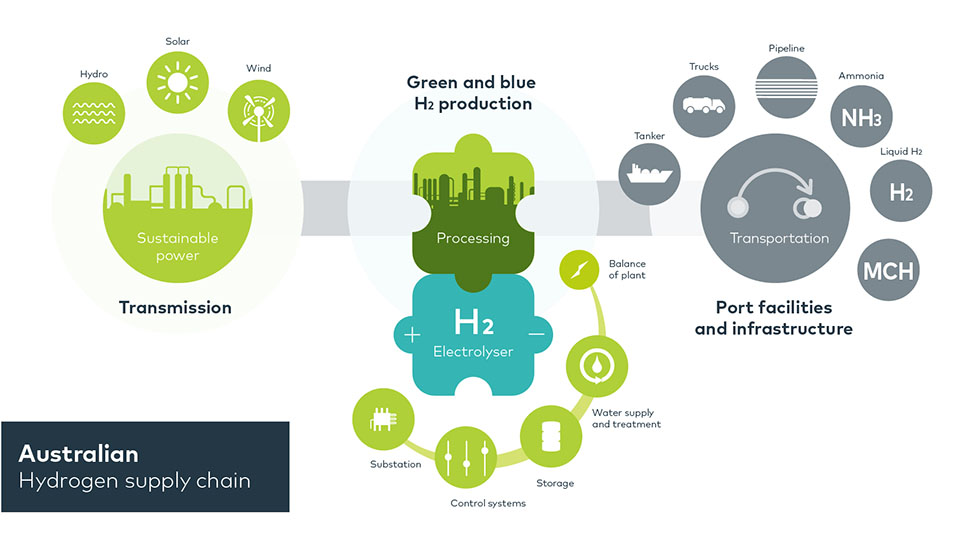 Much of the discussion around hydrogen focuses on the production and application as a fuel. However, the infrastructure presents a similar challenge. Challenges around the storage, distribution and transportation of hydrogen need to be addressed to foresee hydrogen scaling up to the levels needed for deep decarbonisation, as infrastructure ties together production and application.

The technical framework – the different inputs you need to create an export project – is more than just an electrolyser (that you can buy off the shelf), other components include power transmission, water supply for electrolysis and the export vector, which includes options such as MCH, ammonia and liquid hydrogen production from a hydrogen feed gas. This part is key to the Asia Pacific region and represents a large part of the supply chain cost and technical challenge.

Since COVID-19, the federal government has reinforced their hydrogen commitments in support of a clean and competitive Australian hydrogen industry through several funds and a National Hydrogen Strategy. Government support includes AUD$300 million that has been allocated to support hydrogen projects by ARENA and the Clean Energy Finance Corporation.

On a state government level, the Queensland government has launched an AUD$15 million fund as part of their Sustainable Hydrogen Strategy and Western Australia has launched an initial AUD$10 million green hydrogen fund, that recently saw an additional AUD$5 million worth of funding allocated.

If production facilities were to be established that combined the use of electrolysers, solar and wind generation in a resource favourable region, importing hydrogen from Australia would be less expensive than domestic production in Japan or Singapore. (IEA WEO, Nov 2019).

Australia is in a unique position to maximise hydrogen opportunity

The relative growth of hydrogen market costs and how they are potentially competitive with current contracted LNG prices in Australia will be a core factor in the long-term viability of the hydrogen sector and is an area that we need to consider to ensure Australia can be a key APAC market for hydrogen.

Hydrogen’s value chain has no shortage of complexities, and the value chain gets more complicated with the shift toward green hydrogen, but its development could enhance Australia's energy security, create jobs and build a billion-dollar export industry. Local and regional hydrogen markets are already developing, but if a hydrogen economy is to flourish in Australia and the APAC region, significant investment in innovative new solutions and infrastructure is required.