Search all in one place
Article
The power of cooperation

As decabonisation technologies and solutions continue to evolve, global and regional cooperation forming large-scale, low-carbon industrial clusters will be key to unlocking a net-zero future.

The 2021 World Economic Forum concluded today, with Davos Agenda focusing on the theme of advancing global and regional cooperation to achieve sustainability targets, particularly in driving responsible industrial transformation and growth. Collaboration is not just being driven by policy – business and industry leaders are intrinsic to these needed solutions. Just last week, Elon Musk announced he is looking to help push technological advances by offering a $100m prize for the best carbon capture technology and taking proactive steps. Wood’s Midstream and LNG Manager, Tony Tarrant and Carbon Capture Lead, Suzie Ferguson, share their view on the regional partnerships and cross-industry collaborations in industrial clusters that are enabling transformational technical innovation needed to solve industrial emissions.

Major industrial clusters including energy intensive industries such as steel, cement and chemicals play a significant role in the economics and local employment of a region or country. For a nation to meet its net-zero targets, whilst continuing to deliver energy to people’s homes and to manufacture the products that allow their economy to grow, these substantial carbon emitters require a long-term roadmap to decarbonisation.

Rather than being a pollution problem, large-scale industrial clusters that advance regional collaboration are now seen as part of the solution for achieving net-zero targets.

The close proximity of so many emitters in one geographic hub brings the opportunity for them to work together, using common infrastructure for collection, compression and storage of carbon dioxide (CO2) at a reduced cost. For example, on Teesside in the UK, where Wood is helping BP coordinate plans for Net Zero Teesside, there are more than 40 manufacturers located within five miles of each other. The opportunity is great, but the national government, local authorities and manufacturing companies will need to collaborate as never before.

The adoption of carbon capture and storage (CCS) is particularly key in those industrial sectors where full decarbonisation is not possible via any other means because of the chemical processes that are used. When combined with bioderived feedstocks or direct air capture, CCS also affords the opportunity to make the negative emissions we need to achieve net-zero targets. 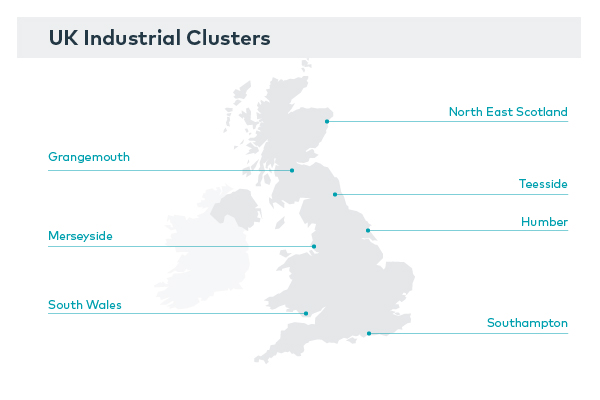 Working with other industrial players, governments, regulators, organisations and geographic regions helps make a range of complementary technologies, scalable solutions and commercial models possible. Alongside carbon capture and storage, that could range from the integration of renewables for power generation, or to produce green hydrogen through electrolysis. The UK Department for Business, Energy & Industrial Strategy (BEIS) sees industrial decarbonisation as one of its five Grand Challenge missions for the next 20 years. Without decarbonisation of these clusters, our hopes of achieving net-zero emissions by 2050 will be impossible.

However, getting different, sometimes competing multi-national, companies with complex systems and intertwined process facilities, with differing emissions profiles, to adopt these new solutions and collaborate with each other alongside governments who equally need to champion prosperity and job creation as well as decarbonisation is no easy feat.

The UK has several large-scale industrial clusters that are currently working on roadmaps to collaborate on decarbonisation: North East Scotland and Grangemouth, Teesside, Humberside, Merseyside, South Wales and Southampton Water. But they are not the only geographical regions considering the industrial cluster approach. The Port of Rotterdam and Port of Amsterdam each have their own plans to collect CO2 into common collection and storage systems.

The attraction is clear for governments seeking the best ‘bang for the buck’ with the investment of taxpayers’ money. If the new Biden administration in the USA follows up on its ambitions to promote decarbonisation, it might well seek to unleash the power of these proven industrial hubs in areas such as the Gulf of Mexico coast.

Optimising deployment of technologies such as carbon capture, fuel-switching and renewable energy to maximise synergies across an industrial cluster to achieve deep industrial decarbonisation, has the potential to advance the energy transition and help governments and business alike, to win the global race to net zero.

We are a partner company in the North East Carbon Capture Usage and Storage (NECCUS) alliance that has recently received £8m of UK Government funding to develop Scotland’s Net Zero Roadmap (SNZR). This builds on work we have undertaken for Scotland’s gas distribution company SGN over the last two years to understand how hydrogen can be used as a carbon-free alternative to natural gas in homes, businesses and for converting larger industrial processes away from fossil fuels. The SNZR project will use our understanding of blue and green hydrogen to model how the North East industrial cluster can achieve net-zero emissions.

The Humber Zero project at Immingham on the south bank of the River Humber is another example of how this is a team effort, with many entities working together to achieve more decarbonisation with less cost, while creating new, skilled jobs. The wider Humber regional cluster extends to inlcude two refineries, a combined heat and power plant and Killingholme Power Station. Local operators include Associated British Ports, British Steel, Centrica Storage Limited, Drax, Equinor, Mitsubishi Power, National Grid Ventures and SSE Thermal. The decarbonisation scheme we’ve developed includes installation of carbon capture facilities to some units, hydrogen refuelling to other units and a redistribution of steam and fuel gas between facilities. To further extend the benefits of low-carbon cluster development, Humber Zero is working closely with operators at Saltend on the north bank of the Humber, and with SSE, British Steel and Drax to the West, creating the UK’s largest single cluster.

As we head down the net-zero road, there are sure to be some wrong turns or missed opportunities on the way. But it’s clear that cross-border and industry collaboration is required to solve many of the known and unknown issues that have still to be fully understood. However, we can be certain that in the net-zero race there can’t be just one winner: we must work together so that we and the future generations are all winners.