The use of natural gas, particularly for heating, is estimated to account for over 40% of the UK’s total carbon emissions; a staggering 170 million tonnes carbon dioxide equivalent (MtCO2e). To put this into context, transportation produced approximately 30% of the UK’s total emissions.

It is clear that decarbonising the UK gas grid is of significant importance to reach the government’s goal of achieving net-zero carbon emissions by 2050. So how to prioritise?

Domestic natural gas usage for heating and cooking dominates the UK’s overall gas demand. Combine this with heavy industry and other industrial usage, these three sectors are responsible for over 70% of demand. Low-carbon hydrogen has a significant role to play in supporting the UK gas grid to decarbonise. “Electrify where possible” is broadly recognised through industry as one of the most effective methods to support the UK’s decarbonisation efforts. However, electrification, from a techno-economic perspective, isn’t viable for all use-cases.

A 20% Hydrogen blend is estimated to reduce carbon emissions equivalent to 2.5 million cars a year, totalling an approximate carbon saving of 4.2 MtCO2e.

Evidence published so-far indicates that household appliances, such as boilers and hobs can safely operate on a 20% Hydrogen blend, minimising the disruptiveness to the consumer when the gas network transitions to a Hydrogen blend. But the key question remains- does the current transmission and distribution infrastructure equipped to support this transition?

While we might not be 100% there today, extensive work is being carried out, particularly by the transmission and distribution networks focussed on the operational readiness of H2 blending. This has involved technical and safety evaluation of areas including asset integrity assessments, system modelling, billing methodologies, appliances (incl. metering) safety assessments, village trials etc. As an example, the European Hydrogen Backbone plan where the repurposing of around 70% of the existing infrastructure is planned. Many mid-stream gas operators are assessing the impact of injecting blends up to 100% H2 into their networks.

Wood is heavily engaged in the design and supporting the operation of the transmission and distribution networks across the globe. Wood has been assuring the transport of >10% of gas supply and >30% of LNG supply across the world. Moreover, Wood have also supported major H2 Transport and H2 Blending Projects including HyNet NW Hydrogen Project (UK) and hydrogen blending (repurposing) into one of the largest gas transmission network in the Middle East.

Our team of experts can address the specific challenges related to hydrogen transportation, including but not limited to flow assurance, material and equipment selection, total expenditure (TOTEX) estimates and code compliance for both new and repurposing of pipelines.

The highly transient and distributed nature of many likely sources of green hydrogen adds a considerable complicating factor.  To ensure that integrity limits are maintained, and energy content swings controlled, the hydrogen concentration must be tracked and monitored at a high temporal and special resolution across the entire grid.

H2 being such a small molecule, correct transient modelling of HENG grids requires the use of complex models and specialised transient models. Measurement and tracking of the blend ratio would be important where hydrogen is incrementally added into the existing gas network (different sources, locations, purity, etc) as it would affect the concentration at a certain point in the system or time and therefore the cost that consumers are to be charged across the network.

Virtuoso ® can be used for both online and offline monitoring and Hydrogen Tracking and distribution, e.g., for integrity reasons and also ensuring the Wobbe Index is consistent and meets contractual obligations for all customers. 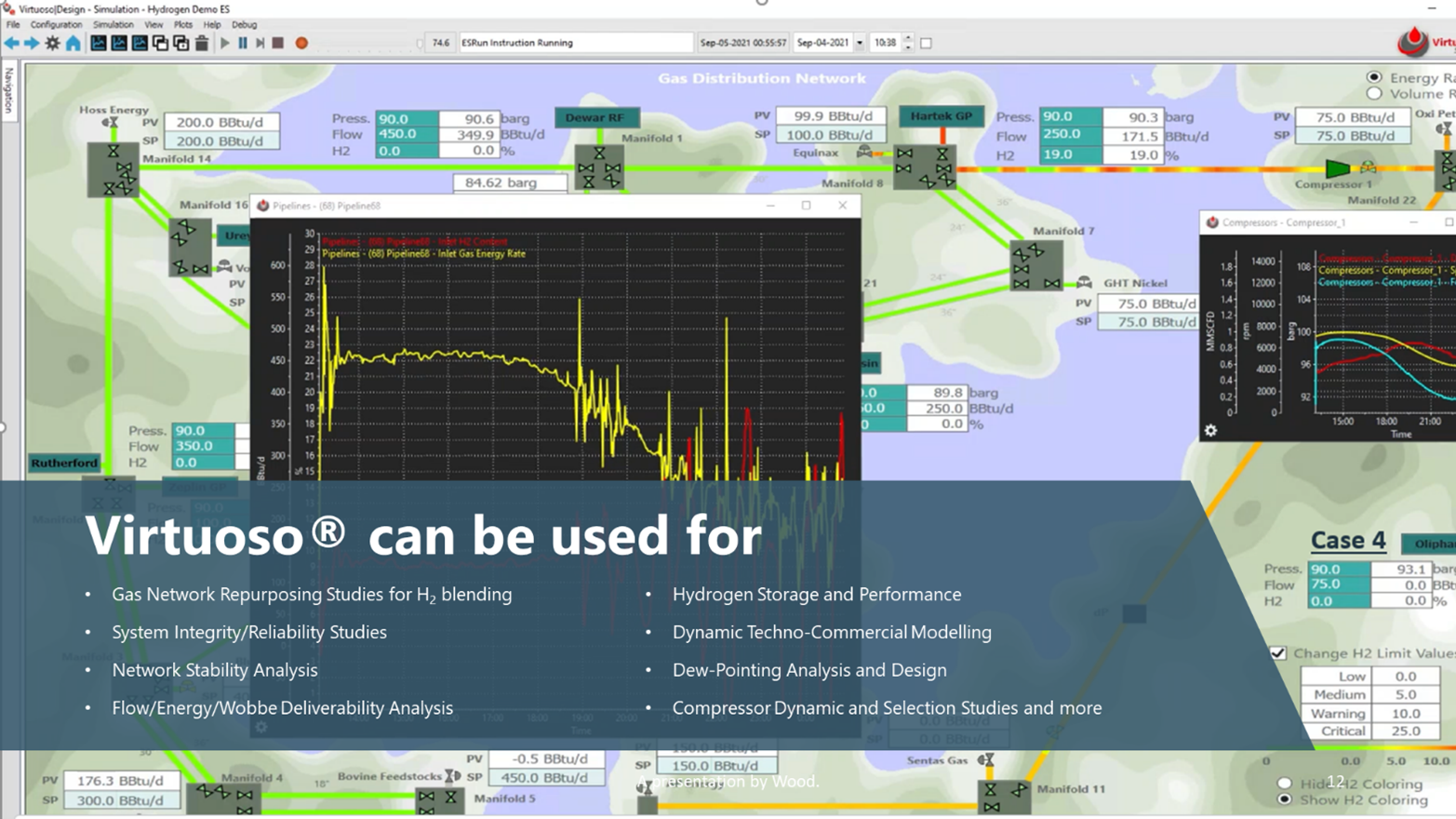 Connect with the team